Mason showing the squirrels his ferocious side

I told you in my last blog about the dislike between Mason and the cats in the neighborhood. The cats just can’t stand Mason. When we pass them, they look at us with their sneaky, beady eyes, and with tails in the up position. Mason, on the other hand, pretends not to see the cats by turning his head in the opposite direction. There have been times when a cat has been sleeping under a bush outside, and Mason decides he has to go under that bush. When this happens, I pull him back on the leash while he barks and the cat screeches. The squirrels outside in front of the house are also enemies of Mason. The squirrels stand on their hind legs in front of the door, which drives Mason crazy. Mason runs back and forth in front of the door, barking. The squirrels are quite bold to me to stand there like that. Mason, as you can tell, just has a personality that animals love to hate.

One day, K called from Afghanistan to tell me that she wanted us to buy a house with the money she was making. I was tasked with managing the money and finding a realtor. I found a realtor, and started looking online for a house in Florida. We didn’t want to deal with snow or excessive cold in our old age, neither did we want to do stairs. Do you know the effort that goes into walking upstairs? When you get old, it’s a little top much effort, though doctors will call it exercise. I call it a Bengay hurt. I saw online that in Florida, there were a lot of houses being sold through the bank. This is called a short sale, where the owner and bank have a arrangement to sell, which is usually low because the bank just wants to get some of its money back. Banks are not in the real estate business, and therefore they will sell houses at a discount. Five years ago, Florida had plenty of short sale houses. I was warned that short sale houses are sometimes ruined by a disgruntled owner. I had a great realtor who looked out for us. There were pitfalls I needed to be aware such as Chinese drywall. Chinese drywall was used in building some houses in Florida because it was cheap. The downside to Chinese drywall is it smells like rotten eggs.

My realtor informed me of which places were good ones, and which were a money pit. She found us a place in a great neighborhood with not too many kids. You have to remember that all this was done over the phone and emails. I didn’t go down even once to see the place. I trusted my realtor, and hoped I did the right thing.

K finally came home, and we drove to Florida with GG and Mason. We were beyond excited to see the Florida house. We found hotels that accepted dogs, and he was still an embarrassment. If he heard any noise in the hallway, he would started barking, and wouldn’t stop. It was a hotel, so there was always noise in the hallway. When we took him out, we had to try to find an area where there weren’t any dogs or people. That all took time and patience, which we were short on. When you get to the development, you have to turn right past the cows. Yep, there were cows at the beginning of the development.

Finally, we got to our new home. It was very nice, more than we expected. One day, while walking GG and Mason, we decided to walk to the corner store, which was past the cows. When Mason saw the cows, he started barking and running back and forth his usually antics. What happened next blew my mind. The cows starting moving toward the fence where we were. They were just looking at Mason, and as we walked, the cows walked sideways along the fence with us. It was a sight to see. I didn’t have a camera with me the one time I needed it. I’ve surmised that maybe Mason is a Dr. Dolittle, an animal that can attract, gather, and be a leader of other animals. OK, maybe that’s a bit much.

The house has a fenced-in patio and pond out back. The ducks and sand cranes can walk to the fenced-in patio, which again drives Mason crazy. They come and just look at him running back and forth, barking. On each of these occasions, GG would sometimes join in or just go in the house. K and I are usually trying to get him to shut up because we haven’t heard any barking from any other dogs. There are plenty of dogs in the development that are probably better controlled than Mason. because you don’t hear them. I hope you enjoyed this blog. Be safe out there, and be sure to check out my other blog, Uniquethings.blog, or visit our store, uniquethingsonline.com. 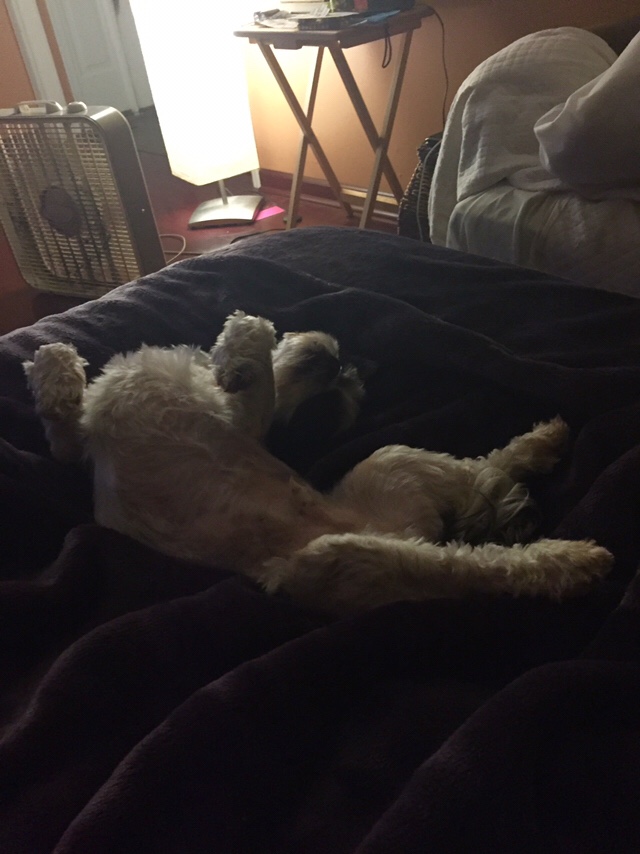 When he’s at his quietness

Retired with dogs is not at all what you would expect. I retired from DoD about 18 months ago. My spouse and I married a year ago and just had our first anniversary. We have two dogs that have honk they are not dogs but rulers of us. Read my blogs to see why I sometimes wish I was still working. View all posts by Unique Things

2 thoughts on “Retirement and Dogs Part 17”

This is a text widget. The Text Widget allows you to add text or HTML to your sidebar. You can use a text widget to display text, links, images, HTML, or a combination of these. Edit them in the Widget section of the Customizer.
%d bloggers like this: